SAVE ON SHIPPING - ORDER ONLINE, PICK UP IN STORE! 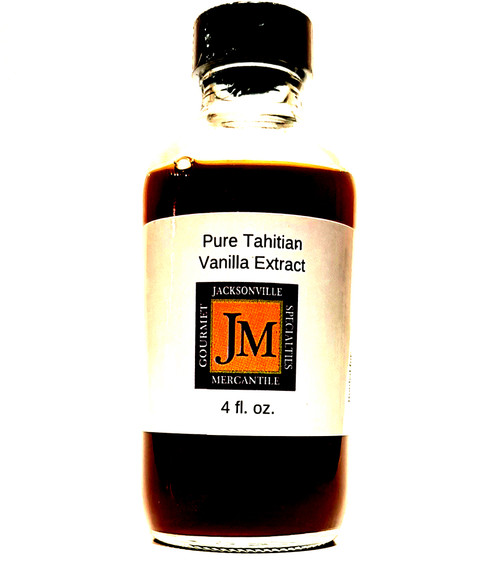 The finest Tahitian vanilla extract to be found. Softer in flavor, this Tahitian Vanilla is wonderful in pastries or buttercreams.   4oz.

We also like to use Tahitian Vanilla mixed with Rogue Creamery Butter to top Grilled Lobster.

This long, thin pod is the fruit of a luminous celadon-colored orchid (vanilla planifolia), which, of over 20,000 orchid varieties, is the only one that bears anything edible. Native to tropical America, the vanilla bean was cultivated and processed by the Aztecs, who used it to flavor their cocoa-based drink, xocolatl, later transliterated to chocolatl. That basic flavoring wisdom is still true today ... Vanilla deliciously heightens chocolate's flavor. The vanilla bean was once considered an aphrodisiac, and was so rare that it was reserved for royalty. Because of the extremely labor-intensive, time-consuming process by which it's obtained, pure vanilla is still relatively expensive today. The orchid blossoms open only one day a year (and then only for a few hours). Because this particular orchid has only one natural pollinator (the Melipona bee), which cannot possibly handle the task in such a small period of time, the flower must be hand-pollinated-otherwise, no vanilla bean. After pollination, pods take 6 weeks to reach full size (6 to 10 inches long), and 8 to 9 months after that to mature. The mature pods, which must be hand-picked, are green and have none of the familiar vanilla flavor or fragrance. For that they need curing, a 3- to 6-month process that begins with a 20-second boiling-water bath followed by sun heating. Once the beans are hot, they're wrapped in blankets and allowed to sweat. Over a period of months of drying in the sun by day and sweating in blankets at night, the beans ferment, shrinking by 400 percent and turning their characteristic dark brown. The better grades of beans become thinly coated with a white, powdery coating called vanillin. Today, the three most common types of vanilla beans are Bourbon-Madagascar, Mexican and Tahitian. Bourbon-Madagascar vanilla beans come from Madagasacar, off the southeast coast of Africa, and its neighbor 420 miles away-the West Indian island of Réunion. They're rich and sweet and the thinnest of the three types of beans. About 75 percent of the world's vanilla-bean supply comes from the Madagascar area. The thick Mexican vanilla beans come from the area surrounding Veracruz. They have a smooth, rich flavor but are scarcer than the Bourbon-Madacascar beans because most areas where the orchid once thrived are now dedicated to oil fields and orange groves. Tahitian vanilla beans are the thickest and the darkest of the three types. It's intensely aromatic, though not as flavorful as the other two types of beans. Vanilla powder is the whole, dried bean ground until powdery. Its flavor doesn't evaporate when heated as readily as that of vanilla extract, which makes it better suited for baked goods, custards, etc. Vanilla extract is the most common form of vanilla used today. It's made by macerating chopped beans in an alcohol-water solution in order to extract the flavor; the mixture is then aged for several months. Extracts can be stored indefinitely if sealed airtight and kept in a cool, dark place. To use vanilla beans, slit them lengthwise down the center and scrape out the thousands of diminutive seeds. These seeds can be added directly to foods such as ice-cream mixtures, shortening to be used for pastry dough, sauces, etc  Vanilla beans may also be used to make deliciously fragrant vanilla sugar. Whole beans that have been used to flavor sauces or other mixtures may be rinsed, dried and stored for reuse. Vanilla adds flavor magic to a multitude of sweet and some savory dishes.